The Magic of Lionel, Part 1
Toys come and go but Lionel trains have endured almost 100 years. Why? What is the magic of Lionel? For the answers, Tom McComas, America’s most popular and respected producer of toy train videos, takes you on an action-packed tour of six Lionel layouts and captures the spirit of toys passed from one generation to the next. All Aboard! Our first stop is…

Karl Burkhardt, Gettysburg, PA. – In 1950, Karl’s dad demonstrated Lionel trains at F.A.O. Schwarz, and Karl has been hooked on Lionel ever since. His 5×10-foot layout illustrates how you can pack lots of action in a small place.

Terry Johnson, Lancing, MI. – The layout is in progress but Terry’s enthusiasm is complete.

Dick Brown, Princeton, IL. – The layout is not big, but oh what dick does with that space.

Ed Mularz, Cleaveland, OH. – You don’t have to be a rocket scientist to operate Lionel trains and accessories, but Ed happens to be one and it helps.

Michael Salnick, West Palm Beach, FL. – Mike loves Lionel, has the layout to prove it, and is not shy about expounding on what’s right or wrong with out hobby.
50 min.

The Magic of Lionel, Part 2
Lionel trains have endured for almost 100 years. Why? For the answer, Tom McComas visited a number of Lionel layouts and talked with the builders. Each told a story filled with nostalgia, tips and great train action.
The Magical World of Lionel, Anywhere, USA. – Harry Turner, the Pied Piper of toy trains, has created the worlds’ largest mobile Lionel train display. It’s all packed in a big truck and everywhere Harry goes, crowds gather.

Roadside America, Sharletville, PA. – 8000 square feet of mountains, animations, figures, vehicles, waterfalls, and Lionel trains – steamers, electrics and diesels. The mix make for a delightful panorama of America as it was when Norman Rockwell was painting covers for the Saturday Evening Post.

Choo Choo Barn, Strasburg, PA. – What began in 1961 as a 500-square foot display with six trains and six animations has evolved into a 1700-square-foot display featuring 13 trains and 130 animations. Fun for everyone.

Underground Railroad, New Castle, PA. – Meet irrepressible Lou Palumbo, New Castle’s King of Toy Trains. Lou has a huge layout and loves to talk about the magic of Lionel (or anything else for that matter).

Trainland USA, Colfax, Iowa. – A combination of toy train layout, geography course, and history lesson. The display depicts the development of the railroads in the United States and takes you on a tour from sea to shining sea.
50 min.

The Magic of Lionel, Part 3

The New Lionel Showroom Layout – An impressive 16×40-foot layout featuring the newest in Lionel trains and accessories. A “wall of history” highlights Lionel trains from 1900 to the present.

Chuck Roehm, Marion IL. – Chuck has two layouts. One is 24×36-feet. The other is six miles long. One features Lionel T-rail track and Postwar Lionel trains. The other, two 150-ton SW-1200 switchers. Chuck has loved trains ever since he can remember, and his story is one of putting rivets in those dreams.

Oscar Fox, PA. – Oscar operates both Lionel O and Standard gauges. Trains run almost everywhere – on the table, under the table, even on the display shelves. He has created a delightful mix of toy trains, buildings, and fun.

Be the first to review “The Magic Of Lionel, 4-DVD Boxed Set” Cancel reply 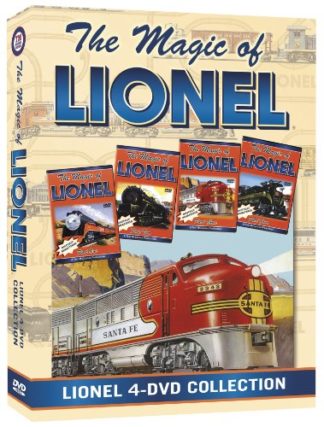