Gorre and Daphetid (Gory and Defeated), the most famous model railroad built in this century, was the life labor of John Allen. Two weeks after John’s untimely death his house and the model layout was destroyed by fire. It was thought that all film recordings of the layout were destroyed in the fire. Thanks to the years-later rediscovery of these films, this DVD can offer you a direct experience of Allen’s miniature world. Enter a vast network of standard gauge, narrow gauge and mixed gauge – even a trolley line.

See more than 100 bridges, no two alike, some soaring 5 feet above the floor. See engines crawl through the labyrinthine canyons of the Akinback Mountain range, complete with working cable cars and water wheels. Catch the saga of the notorious Sore Feats Gang and their terrible but richly-deserved final demise.

John’s own slides magnify his exquisite detail, from the snow capped peaks to city lights, and bring to life to the thousands of miniature people and working railroad artifacts that have surprised and delighted so many – train fans, model railroaders, and indeed, all those with an imagination! 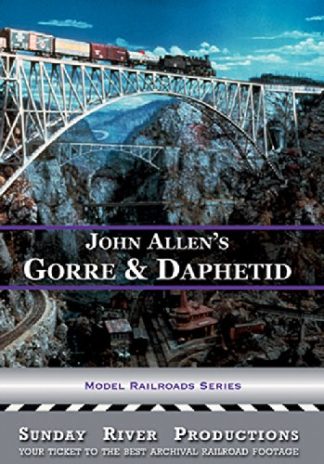