Great MTH Layouts, Parts 1 and 2 on one DVD
MTH has made a big impact on the O gauge model train market. In the early 90s sales skyrocketed to over $60 million. This dramatic growth has been fueled by the emergence of a new breed of model railroaders called “Hi-Raiders” (layout builders who want the dependability of three-rail operation with scale model accuracy). “I wanted my new layout to be realistic,” says Tony Lash, whose spectacular 70×45-foot layout is featured in this video, “and I didn’t want anything that looked like a toy. MTH filled my needs.”

Tony’s layout is museum quality. Featured are Premier steamers, diesels and rolling stock, including the Berkshire, Big Boy, Shay, Y-gbs, SP Daylight set and many more. Another highlight is the trees – $60,000 worth. Tony commissioned the best scale model and scenery makers to create a truly spectacular, finely detailed layout. Be prepared to be amazed.

Also featured is the new MTH showroom layout which includes an interview with MTH President, Mike Wolf, plus a two-level, scale detailed layout custom-built under the direction of internationally know designer Richard Johnson.

Great MTH Layouts, Part 2
Two layouts – one, an exquisite three-rail scale layout that pushes the hobby to new levels; the other, a time machines designed to take its builder back to the days when he was a boy playing with electric trains.

John Shankland incorporates the ideas of model railroad legends John Armstrong, Frank Ellison, John Allen, and Dave Frary to create a layout that not only raises the bar for scenery, but features prototypical railroad operations. The emphasis on Steve Scholl’s layout is all fun – lots of trains running and just about every accessory.
110 minutes.

Be the first to review “Great MTH Layouts” Cancel reply 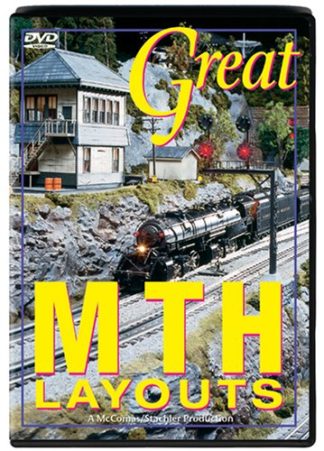