Great Lionel Layouts, Parts 1
First stop is the layout and collection of Fritz Von Tagen. His collection features just about every known variation of the Lionel Hudson (and one that isn’t known) plus a number of prototypes. The train action features rare Hudsons (including three passenger sets at one time!), the UP M10,000, Williams Southern Pacific steamer, Lionel Halloween Set, a Standard Gauge GG-1 set and many more.

Great Lionel Layouts, Part 2
Stars of the show are the multi-gauge layout of Chris Rohlfing and Seth Giem’s scale-detailed o gauge layout located in the train barn in Kalamazoo, Michigan.
Chris operates five loops of O gauge surrounded by one Standard Gauge, See Lionel Legends like the Blue Comet and State Set plus modern era standouts like the blue and orange Lionel Lines set, GS-2, Conrail SD-60 plus many more.
Highlights of the Train Barn layout include a 160-foot suspension bridge and over 200 scale structures, many scratch-built by Seth, a master model-maker. Train action includes the UP M10,000, 773 Hudson, C&O SD-40 and other classics from all eras.
Also included is the heartwarming story of Glen Pinta. In 1991, Glen was diagnosed with colon cancer. Today he has a clean bill of health and he credits the building of this layout for helping him to beat cancer. 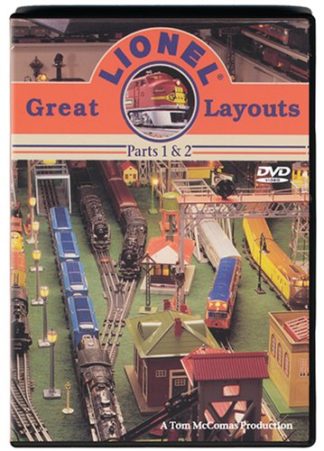